Margate is a city in Broward County and as of the 2010 census, the city had a population of 53,284. It is part of the Miami–Fort Lauderdale–Pompano Beach Metropolitan Statistical Area, which is home to 5,564,635 people.

It was founded in the 1950s when much of it was still either part of the Everglades or farmland. It then became a town in 1955, when land development became prominent due to an influx of people moving to Margate. Soon after, in 1961, it was officially incorporated as a city. The name of the city itself is a portmanteau of the first three letters of the founder's last name, Jack Marqusee, and the first four letters of gateway, since it was considered a "gateway" to western Broward County. The city also has a waterpark called Calypso Cove, and three golf courses, with one of them also tennis court as well: The Eagle Lakes Golf Course, the Carolina Golf Club, and the Oriole Golf and Tennis Club. 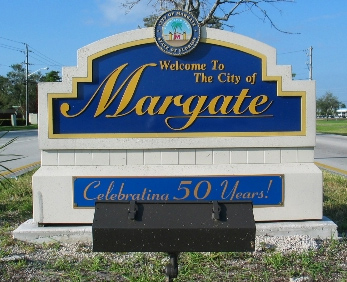